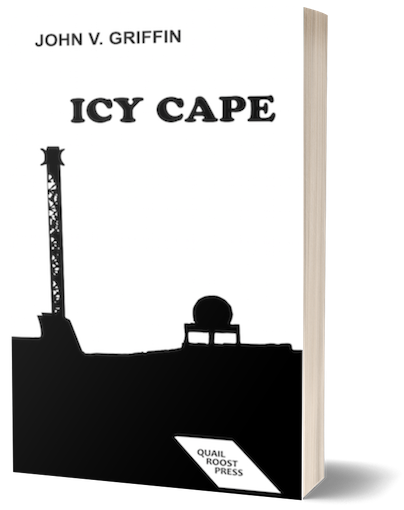 The coldest part of the Cold War…

Welcome to Alaska and ICY CAPE by John V. Griffin

Follow Quinn and his team through their adventures of working at this remote radar station in the early 1960s. Faulty equipment, local wildlife, and the weather are just some of the obstacles these men must overcome to survive.

Available in eBook, print, and audio!

get the book now!

“This is the story of the emotions created by darkness, cold, isolation – fear and friendship. The DEW (Distant Early Warning) Line was one of the last frontiers of the American myth. It offered adventure, money, and an escape from reality and responsibility. It attracted descendants of the whaling men of two centuries ago, and the cowboys of the last century. These disparate personalities lived and worked side-by-side with Eskimos…

“The story is a fascinating juxtaposition of values and cultures – Chateaubriand and muktuk. The characters are definitely the men you might expect to be attracted to such remote outposts, they were the same men who would later migrate to jobs in Southeast Asia and the Middle East. But, at least as interesting was the world around them – the Arctic.”

Get Your Copy
Order the audiobook now!

John (1936-1995) was born in Boston, Massachusetts. During the early 1960s, he worked as a radar technician on the Distant Early Warning (DEW) radar line in Alaska. Subsequently, he became a writer for industry and worked on a variety of writing assignments for defense and electronic firms. In 1967, he headed a team of technical writers on a project to document communications in South Vietnam. In 1972, he received his Bachelor’s degree in English from Northeastern University, and in 1973, he earned a Master’s degree in Education. Because of his various assignments and travel, it took him 13 years of night school to earn his degrees.

In 1977, his job was relocated, and a 10-minute commute became a very long one-hour commute. To combat the tedium of the ride, he started to tape-record notes for a possible book about his different writing jobs. Quite quickly, the notes became voluminous, so he selected one of his earliest and most interesting jobs – on the DEWLine at Icy Cape, Alaska

[The above biography comes from John V. Griffin’s original “About the Author and the Book”.]

Purchase the book now on Amazon